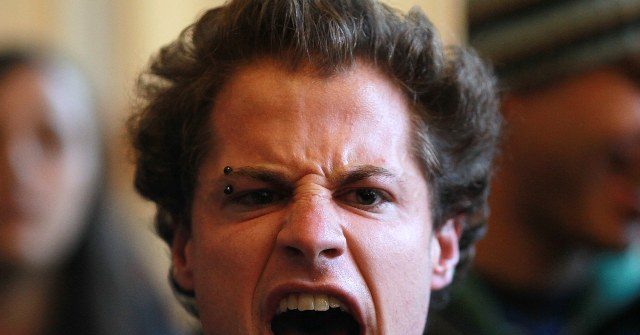 Larry Sanger, the co-founder of Wikipedia, has come under fire from the site’s editors over his criticism of the site’s left-wing bias. His criticism particularly cited an ongoing purge of conservative media on the site. While some editors tried to dispute his claims, others have smeared Sanger with accusations of antisemitism and trafficking in conspiracy theories to discredit him. Editors have also kept mention of his criticism of left-wing bias out of Wikipedia articles on the topic, due to such criticism being covered mainly in conservative media.

Many Wikipedia editors criticizing Sanger are involved in advancing a left-wing agenda on the site. While some editors agreed there was some legitimacy to Sanger’s criticism of Wikipedia, it was mainly those who have run afoul of biased left-wing editors in the past.

Over the past year, Sanger has authored blog posts and spoken in interviews regarding concerns about left-wing bias at Wikipedia. Last year, Sanger declared the site’s neutrality policy “dead” comparing how Wikipedia covered scandals in Donald Trump’s Administration to those in Barack Obama’s Administration as well as issues in other articles on sociopolitical topics. Sanger stated Wikipedia’s “commitment to neutrality” was “long gone” and that “the deck is too stacked on Wikipedia for it to ever be salvaged” in an interview for Fox News in February for an article that found articles on communism and socialism omitted atrocities committed by governments espousing the ideologies.

In June, Sanger published his latest criticism stating that Wikipedia has became one-sided propaganda to the point it was “a kind of thought police” and “opponent of vigorous democracy.” He cited how Wikipedia covered Trump’s impeachments, Joe Biden scandals, last year’s Black Lives Matter and Antifa protests and riots, and allegations of 2020 election irregularities, as well as the banning of conservative outlets. In a recent interview with conservative outlet Unherd, Sanger stated Wikipedia could not be trusted and because of the site’s influence editors were engaged in “a very big, nasty, complex game” in order “to make the article say what somebody wants them to say.”

Sanger’s latest blog post prompted a discussion at a noticeboard where Wikipedia editors discuss neutrality issues. Editor “MjolnirPants” promptly stated if he expressed his real views he would be banned for incivility, but otherwise dismissed Sanger’s criticism. Regarding criticism of Wikipedia coverage on Trump’s impeachment, Mjolnir argued Wikipedia provided “a dispassionate recitation of the facts” and later added: “Reality has a well known liberal bias.” However, while claiming the article simply recited facts, the article’s claim that “Trump’s lawyers did not deny the facts” laid out in the impeachment charges was false as Trump’s legal team repeatedly denied a key charge that he used military aid to pressure Ukraine into investigating Biden’s actions in the country.

More editors merely dismissed Sanger’s criticism, saying he did not understand site policies or was a “disgruntled busybody” whose opinion wasn’t worth noting. One editor went further, noting Sanger’s use of the term “globalist” to describe major progressive media. Claiming the term has been “used by anti-progressive right wingers and far-right people as an antisemetic dogwhistle” the editor suggested this was Sanger’s intent. On the other side, editors “Masem” and “North8000” agreed with the legitimacy of certain criticisms Sanger made. While Masem argued Sanger’s criticism regarding banned outlets was not viable, he agreed Wikipedia articles often reflect a systemic left-wing bias in “reliable” sources and argued for adopting a more neutral tone.

A discussion was also started at the personal discussion page for Jimmy Wales, Sanger’s fellow co-founder, noting coverage in the Independent about Sanger’s Unherd interview. Editor “Bilorv” criticized the outlet claiming it was given overly favorable attention to Sanger, who the editor described as “far-right” with administrator “Black Kite” accusing Sanger of “right-wing tinfoil-hattery” in another comment. Regarding Sanger’s criticism about articles not really presenting the views of Republicans on American political issues one editor quipped that their “perspective on almost any subject is based on their disinformation campaign.” North8000 argued increasing bias in the media has rendered the neutrality policy obsolete regarding American politics and changes should be made.

Those involved in these discussions often had a controversial history on political articles. Mjolnir had a history of abusive conduct towards editors he felt unduly favored a right-wing perspective and was banned two years for smearing an editor as “racist” and doxing him. Bilorv was involved in advancing the Black Lives Matter agenda on the site last year, helping get articles pushing that agenda on Wikipedia’s front page. In the case of an article on bail funds, despite clear bias towards criticizing the bail system, Bilorv argued it complied with the neutrality policy and approved its front page appearance.

Editors sympathetic to Sanger’s criticism have previously faced issues for opposing left-wing bias on Wikipedia. North8000 has been repeatedly sanctioned and was banned from the site previously, mainly for criticizing the conduct of biased left-wing editors in ways deemed “uncivil” under site policy. Masem was involved in Wikipedia’s dispute over the GamerGate anti-corruption movement in gaming with several anti-GamerGate members of Wikipedia’s Arbitration Committee, often likened to a Supreme Court, pushing for his ban from the article for comments advocating a neutral tone on the page about the movement and associated controversy. While that proposal was rejected, other left-wing editors gradually harassed him away from the page.

Disputes about Sanger’s criticism of left-wing bias at Wikipedia have also played out at articles on the matter. An article about “ideological bias on Wikipedia” has been the subject of repeated fights over mentioning Sanger’s views. Early attempts to note Sanger’s criticism saw left-wing editors repeatedly remove mention of it. Although mention of Sanger’s criticism managed to stay up for several months, it was eventually removed claiming an earlier discussion had reached “consensus” against the material. Mostly left-wing editors, including those involved in smear campaigns against conservatives or white-washing the violent far-left Antifa group’s Wikipedia page, rejected mentioning it stating “reliable” sources had not covered Sanger’s views.

Later efforts to mention Sanger’s criticism of Wikipedia’s left-wing bias were similarly rejected by arguing no coverage existed in sources deemed reliable on Wikipedia with editors going so far as to argue noting his criticism gave “undue weight” to a “fringe” view. As outlets covering Sanger’s criticism were nearly all conservative, most were included in the purge of such sources in recent years with Fox News last year discouraged specifically as a source on political issues, despite otherwise being deemed reliable. Switching from claims about “reliability” to “undue weight” is a common tactic Wikipedia editors use to exclude conservative views under the site’s verifiability policies.

Article discussion pages also saw editors malign Sanger to discourage mentioning his criticism. In a discussion of one of Sanger’s blog posts, editor Paul Lee, who currently edits as “Valjean” on Wikipedia, claimed Sanger “believes in some conspiracy theories and nonsense from unreliable sources” when arguing he was not reliable for claims of bias at Wikipedia. Lee is also the primary author of the heavily slanted article on the Steele dossier, which drove much of the Russia collusion hoax narrative about Trump. While Sanger’s article allowed mention of his criticism, editors lamented that current coverage did not allow them to add smears about his “radicalization” to the page.

In general, the “ideological bias of Wikipedia” page omits most left-wing bias claims. The article primarily covers Harvard studies co-authored by Shane Greenstein and Feng Zhu framed in the most favorable light for Wikipedia by focusing on findings that Wikipedia’s bias comes closer to Encyclopedia Britannica the more edits are made and editors become more neutral the more they edit. However, both studies found Wikipedia still exhibited a left-wing bias. Other studies and analyses are excluded for not meeting “reliability” standards, including an academic analysis in the Critic that found editors favoring right-wing views were six times more likely to face sanctions than those favoring left-wing views.

Wikipedia’s left-wing bias has not deterred media and academia from relying on the site for information to the point of extensively copying, and even allegedly plagiarizing, the site in extreme cases. This reliance has often meant the site has spread hoaxes. Big Tech has also used Wikipedia in its efforts against “fake news” spurred on by corporate media praise and a public relations campaign by the site’s owners based on a recommendation from a firm owned by the Head of Communications at the Clinton Foundation.

(Disclosure: The author has previously been involved in disputes on Wikipedia with some parties referenced in this article)

T. D. Adler edited Wikipedia as The Devil’s Advocate. He was banned after privately reporting conflict of interest editing by one of the site’s administrators. Due to previous witch-hunts led by mainstream Wikipedians against their critics, Adler writes under an alias.

‘Not clear yet’ if booster shots of Covid vaccine are needed,...