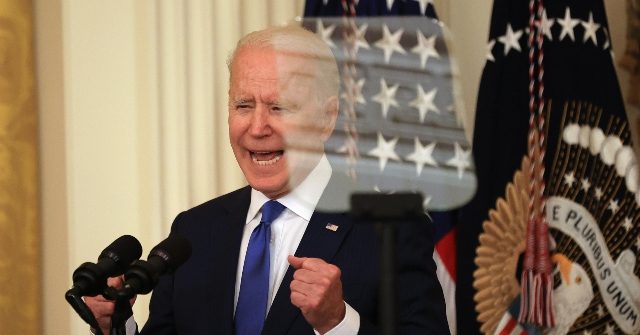 The White House on Friday attempted to walk back President Joe Biden’s ultimatum that he would reject his own bipartisan Senate infrastructure deal if it was not accompanied with another partisan budget reconciliation bill for entitlements.

The White House revealed that Biden spoke to Sen. Krysten Sinema (D-AZ) on Friday, a key negotiator for the deal, and asserted that he would sign the bill if passed.

“The President looks forward to signing both these bills,” the White House said in a readout of the call signaling support for both the Bipartisan Infrastructure bill and the American Families Plan.

Biden said Thursday he would not sign the bipartisan bill unless the American Families Plan, passed with a partisan Democrat vote through budget reconciliation,  reached his desk at the same time.

“I control that. If they don’t come, I’m not signing it. Real simple,” Biden said when reporters asked how he planned to get both measures through Congress at the same time.

Biden said he would not only demand a deal with more entitlements but also additional tax hikes to pay for it.

That shocked Senate Republicans and even some moderate Democrats who negotiated with Biden.

McConnell questioned Biden’s thinking on the bills, noting that it was a “tale of two press conferences” on Thursday.

“I think we’ve gone from optimism to pessimism as a result of the president’s second press conference,” McConnell said.

Republican and Democrat concern prompted Sinema’s conversation with Biden on Friday in an attempt to clarify what he meant.

The subsequent White House readout of the call made no mention of Biden’s demand for both bills to end up on his desk without signing it.

The president has not officially clarified his own remarks about the two bills on the record, but he now has to face whether or not he will keep his word with both Democrats and Republicans.

“In my years in the senate, the single greatest currency you have is your word. Keeping your word,” Biden said on Thursday.