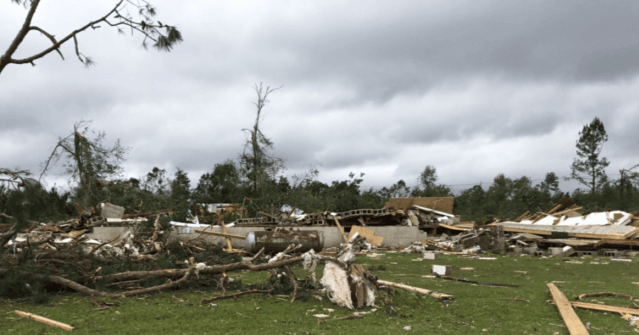 Tornadoes and severe thunderstorms ripped through central Mississippi, causing widespread damage to the area, according to videos and photos of the incident.

The video showed the moment the tornado made its way through Pelahatchie in Rankin County late Friday evening while a tornado siren blasted.

The National Weather Service of Jackson, Mississippi, announced at 5:45 a.m. that the “severe weather threat” had ended but cautioned people to “remain vigilant” for any residual flooding.

5:45 AM: The severe weather threat has ended across our area, and the last round of rain is in the process of moving out. If you are venturing out this morning, please remain vigilant for any areas where flooding persists. And remember #TurnAroundDontDrown ! pic.twitter.com/RcprkrEt0F

At least two residences were destroyed because a tree fell on the roof or because the roof fell in, but no injuries were reported, WLBT reported.

In other areas of central Mississippi, there were images of downed trees.

@NWSJacksonMS a whole tree is down in my neighbors back yard from last nights storms. Near USM in Hattiesburg. pic.twitter.com/hXar9TMxTl

The tornadoes and thunderstorms also caused widespread power outages to homes and businesses in the aftermath of the storm.

By 1:06 p.m. on Saturday, 18,701 people throughout the state had lost power, according to poweroutage.us, a site that tracks power outages.