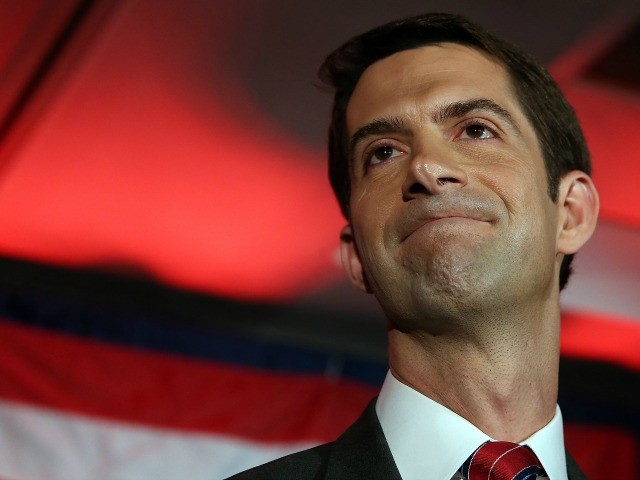 Sen. Tom Cotton (R-AR) has launched an initiative to elect conservative veterans to Congress and win back Republican majorities in both the U.S. House and Senate.

“The best way to stop the Biden-Harris agenda is to bring more conservative leaders to Washington,” Cotton said in a statement announcing the push. “And the skills veterans learn while serving our country make them uniquely qualified to lead. Today, I am launching the ‘Veterans to Victory’ program to give veterans the support they need to win and take back the majority.”

Cotton’s program comes with three initial endorsements—two are of battleground district Republicans seeking reelection and a third are of a conservative candidate seeking to unseat a battleground district Democrat. His Veterans to Victory endorsements off the bat include both Reps. Mariannette Miller-Meeks (R-IA) and Mike Gallagher (R-WI) as well as Derrick Van Orden in Wisconsin’s Third Congressional District.

Cotton joined the U.S. Army after the al-Qaeda terrorist attacks on September 11, 2001, serving as an infantry officer for almost five years on active duty, including combat tours in Iraq and Afghanistan.

Cotton is heading to Iowa on Tuesday to highlight the program. Those candidates he endorses in the initiative, Cotton’s team said in a release, will get Cotton’s formal endorsement for both the primary and the general election as well as financial support from Cotton’s political action committee (PAC) and an online fundraising partnership, as well as appearances on the ground in their districts for campaign events from Cotton and attack ads against the Democrat opponents they will face.

Miller-Meeks, an Army veteran who won by just six votes against her Democrat opponent, fended off a challenge by House Speaker Nancy Pelosi as part of a Democrat effort to overturn the results of the election in that district. She said she is excited to have Cotton’s support.

It is a tremendous honor to be part of Senator Cotton’s Veterans to Victory program. Tom Cotton proudly served in defense of our country under some of the most difficult circumstances in both Afghanistan and Iraq. He understands why people like me choose to serve in America’s armed forces because he’s been there himself.

“The number of military veterans serving in Congress and the Senate has declined in recent years, and that’s created a troubling void,” he said, adding, “We need more conservative veterans in Congress, and I’m so glad to see that Tom Cotton has stepped up, once again, to do what’s right for our country.”

Gallagher, a Marine veteran, similarly praised Cotton’s backing, saying it will be critical to his reelection efforts in Wisconsin.

“America’s veterans put service before self. They are battle-tested and possess the skills and experiences necessary to meet our most pressing challenges,” Gallagher said. “Our nation benefits from having more servant-leaders in Congress and I’m honored to be a part of Senator Tom Cotton’s Veterans to Victory program as we fight for conservative principles and defend the values that make America so exceptional.”

Van Orden, too, said he was excited to have Cotton’s support. Van Orden, a Navy SEAL veteran who ran last election against Democrat Rep. Ron Kind (D-WI) and nearly won, is running again in the 2022 midterm elections and has the support of the entire House GOP leadership team from GOP leader Kevin McCarthy to Whip Steve Scalise and Conference chairwoman Elise Stefanik. That district is one of the most hotly contested in the country, especially as a number of scandals threaten Kind’s decades of Democrat control of the seat.

“It is an honor to receive this recognition from Senator Cotton and Veterans to Victory,” Van Orden said. “As servicemembers, we took an oath to support and defend the Constitution against all enemies foreign and domestic. That oath never expired. I am proud to stand with my fellow veterans as we take on the mission of returning Washington, D.C. to a place of service to the nation. We will do our duty.”