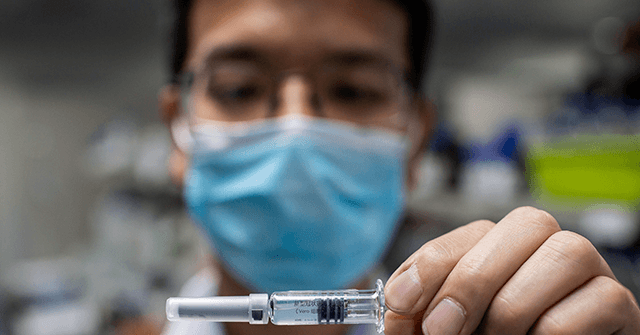 The Food and Drug Administration (FDA) of Thailand warned Tuesday that it had discovered 110 defective doses of the coronavirus vaccine by Chinese corporation Sinovac Biotech, unusable due to what the media outlet Coconuts described as “lumps of gel” trapped in the dose bottles.

Sinovac was the first Chinese company to debut a Chinese coronavirus vaccine, made with inactivated cells of the coronavirus itself — a contrast to the top American vaccines, by firms Pfizer and Moderna, that use unprecedented mRNA technology to trigger an immune response. Other vaccines in global distribution, like those produced by American company Johnson & Johnson and European company AstraZeneca, use inactivated cells of a different virus — in their case, the common cold-causing adenovirus — to deliver “spike proteins” present on the outside of Chinese coronavirus cells.

Clinical trials initially showed Sinovac’s product, known commonly as “Coronavac,” to be the least effective vaccine against the Chinese coronavirus in widespread global distribution. Clinical trials published in January found Coronavac to be 50.38-percent effective at preventing coronavirus infections, barely meeting the World Health Organization’s (W.H.O.) 50-percent threshold for approval. Sinovac has since repeatedly insisted the vaccine is closer to 80-percent effective but has faced significant criticism after nations primarily relying on its product — most prominently Seychelles and Chile — experienced coronavirus case surges in the immediate aftermath of successful Sinovac vaccination campaigns.

According to Coconuts, a pan-Asian media outlet that translated the Thai FDA’s statement Tuesday, the agency identified a batch of Sinovac doses that, when shaken, would not blend properly, rendering them unusable.

“Surachok Tangwiwat of the Thai FDA has instructed medical professionals to avoid giving these doses to people and report any abnormalities to the agency immediately,” Coconuts reported. “Sinovac must be shaken before use. In the case of these doses, even when shaken, the lumps of gel would not disperse into the liquid, according to Surachok.”

The statement as published appeared to blame improper handling of the vaccine at some point in the delivery chain between China and Thailand for the failure, not Sinovac Biotech for factory defects. Coronavac requires constant refrigeration at between 35ºF and 46ºF.

“The FDA has asked to keep the vaccine at the right temperature. One vaccination site was found containing a solution of the vaccine concentrated as a clear gel in the bottle,” the statement read, “of which 110 bottles were not injected and no other injection sites were found in the lot.”

The FDA left open the possibility that some doses in the defective batch may have already been administered to patients. It urged medical workers to “emphasize” to patients that the vaccine is safe despite the current incident.

Coconuts noted that Thailand has administered over 10 million Sinovac doses since first receiving them in February. At the time, Chinese state media boasted that Sinovac would ship an initial 200,000 doses to Bangkok of a promised 2 million and quoted Thai Prime Minister Prayut Chan-o-cha calling the delivery “historic.” The current Thai regime, which enjoys close ties to China, continued using the vaccine candidate as its primary innoculation product even as cases emerged of what Reuters called “unusual ‘stroke-like’ side effects” among some patients in April. Like Seychelles and Chile, Thailand began documenting record numbers of coronavirus cases after relying on Sinovac, peaking in May. Officials blamed the high case count in part on outbreaks inside prisons, where the tightly packed conditions especially lend themselves to the spread of contagious disease.

As of Tuesday, Thailand has documented 254,515 cases of Chinese coronavirus and 1,970 deaths in a nation of nearly 70 million people.

Singapore’s Channel News Asia (CNA) noted this month that, despite the government’s efforts to convince Thai people to trust Coronavac, “public trust in the Prayut government is low, and citizens lack confidence in the safety of the vaccines obtained by the government.” Prayut came to power in a military coup widely opposed by the nation’s vocally pro-democracy youth, which, CNA noted, view the Chinese Communist Party “with suspicion and even hostility, and products from China are widely viewed as cheap and lacking quality.” The Communist Party did not weigh in to oppose the 2014 military coup and has actively pursued closer relations to Prayut’s government, investing heavily in the economy and making itself a more prominent presence in the country generally. Some of that investment in Prayut has come in the form of military aid that pro-democracy activists fear will be used against them, CNA noted.

Thailand’s Public Health Ministry hosted a study on Sinovac’s effectiveness between April and May, when concerns had escalated over its ability to protect from coronavirus infection. The results, published on Tuesday, allegedly show that Coronavac is as much as 91-percent effective in preventing infections. The study only focused on the “alpha” (United Kingdom) variant of the disease.

“The study confirmed that double doses of Sinovac vaccine were effective in reducing infection by the Alpha variant by 71%-91%,” the Bangkok Post reported. “The subjects of the study were from high-risk groups in Phuket, Samut Sakhon and Chiang Rai as well as public health workers.”

The results track with the claim made by Sinovac CEO Yin Weidong in March that the vaccine candidate was “80-90 percent” effective against infections, which he never supported with any study results. Yin later cast doubt on his own claim, however, by promoting a potential third dose of the vaccine as a solution to efficacy concerns.

“After completing the two shots, our body has already produced an immune memory. As for when the third shot will be needed, please give researchers more time to study it,” Yin said in early June.

“It’s now under formal consideration whether we should use different vaccines from different technical lines for the immunization process,” Gao said in April, later claiming media quoting his statements had engaged in a “misunderstanding.” “Everyone should consider the benefits mRNA vaccines can bring for humanity. We must follow it carefully and not ignore it just because we already have several types of vaccines already.”