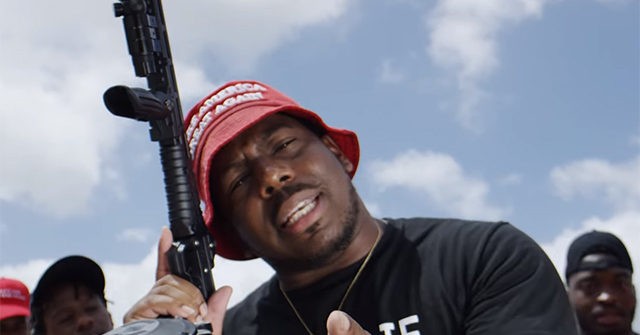 A message from SoundCloud posted by Bryson Gray on Twitter claims the song was taken down for “incitement to hatred.”

The song’s lyrics denounce supporters of Black Lives Matter and viewers of CNN as “braindead,” and declares that there are only two genders. Its very first lines read:

They might ban me for this song, but this is how I’m rocking
Can’t be trans ’cause it ain’t real, they need a mental asylum

In a comment to Breitbart News, Patriot J said that if tech platforms really wanted to ban “hatred,” most mainstream rap songs would have to be banned as well.

“The ban just shines a spotlight on how far Big Tech is willing to take their censorship of dissenting views,” said Patriot J. “Spotify and SoundCloud don’t actually care about allegedly ‘hateful’ or ‘violent’ songs being on their platform, because if that were the case, they’d have taken down almost all of the popular rap songs on their platforms.”

“We were silenced for being brave enough to go against the radical left agenda, and now we’re paying the price. Just another day in Joe Biden’s America!”

The song has been praised by Rep. Paul Gosar (R-AZ). “These guys are deep in the culture war and taking incoming fire,” said Rep. Gosar on Twitter. “This is where conservatives abandoned the battlefield 40 years ago. Respect!”

These guys @sirhottest and @RealBrysonGray are deep in the culture war and taking incoming fire. This is part of what @RedPilled_USA @courrielche @RedPilledChica talk about. This is where conservatives abandoned the battlefield 40 years ago. Respect! https://t.co/NeLW7z1CJH

“SAFE SPACE” has OFFICIALLY BEEN BANNED ON SOUNDCLOUD. THEY JUST EMAILED ME. WOW. CENSORSHIP IS REAL,” said Gray on Twitter.

After I made that thread, “SAFE SPACE” has OFFICIALLY BEEN BANNED ON SOUNDCLOUD. THEY JUST EMAILED ME. WOW. CENSORSHIP IS REAL. pic.twitter.com/0pcHh4l7YZ

The message to Gray from SoundCloud states that the song was found to be “in breach of our Terms of Use on the grounds of incitement to hatred.”

Brb updating my resume with “banned from SoundCloud” https://t.co/KMHCQML4gE

It’s not the first time Spotify has been in the news for censorship. The popular music and podcast app censored 42 episodes of the Joe Rogan Experience podcast following pressure from far-left employees.

It comes as Spotify is expanding. The platform launched the audio social network Spotify Greenroom last week to compete against Clubhouse, a voice chat and podcast app that has been criticized by left-wing journalists for being insufficiently censorious.

As Spotify censors black conservatives, it is elevating black left-wingers. Leftist journalist Jemele Hill recently cemented a partnership with Spotify for an exclusive podcast. According to Hollywood Reporter, the podcast aims to “elevate the voices and stories of black women.”

Breitbart News has reached out to Spotify and SoundCloud for comment.

Allum Bokhari is the senior technology correspondent at Breitbart News. He is the author of #DELETED: Big Tech’s Battle to Erase the Trump Movement and Steal The Election.