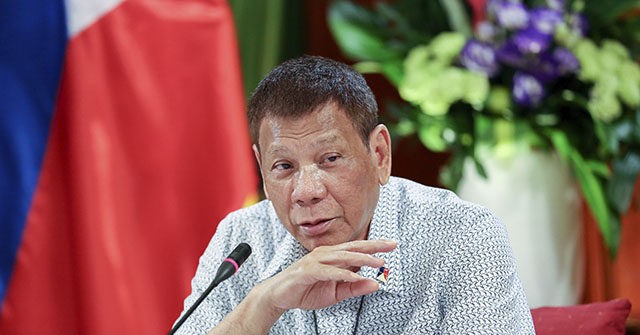 Philippine President Rodrigo Duterte scored a 65 percent approval rating, a near 30-point drop from his all-time high in September 2020, for his performance in office over the past four months in an independent poll released this week.

The Philippine pollster Publicus Asia conducted the survey from March 20-29 and found:

Approval and Trust Ratings for President Duterte remains at a high in his last fifteen months in office. SP Sotto comes in second, followed by VP Robredo, Ret. CJ Peralta, and Speaker Velasco.#PAHAYAGQ1

“The purposive sampling survey composed of 1,500 respondents of registered voters was drawn from an online research panel of approximately 100,000 Filipinos maintained by [a] Singapore-based firm,” Publicus Asia wrote of its April 6 survey.

President Duterte’s approval rating has dropped nearly 30 percentage points over the past six months, as he scored a record-high 91 percent approval rating in a survey conducted by the nonprofit Philippine pollster Pulse Asia in September 2020.

Publicus Asia gauged Duterte’s latest approval rating from March 20-29, a time period that coincided with the Philippine government’s decision to lock down the national capital area — Metro Manila, home to 25 million people — to contain the spread of a new regional cluster of Chinese coronavirus cases. The order banned public meetings, including religious gatherings, in Manila during the Philippines’ Easter Holy Week, March 22-April 5. The timing of the religious gathering ban was no doubt met with frustration from many of Manila’s Catholics, as the Philippines is Asia’s largest Roman Catholic nation.

“In the exercise of police powers, we can order the churches closed and I hope it will not come to that,” President Duterte’s spokesman, Harry Roque, said at a regular press briefing on March 23 when asked about a rumored plan by Manila priests to proceed with Easter masses despite the gathering ban.

Duterte’s lockdown order also banned indoor dining at all Metro Manila restaurants, prohibited non-essential travel into and out of the capital, and forced residents to observe a strict 6:00 pm curfew. The restrictions, which were extended by the Philippine government for an additional week on April 5, also apply to four of Manila’s outlying provinces: Laguna, Bulacan, Cavite, and Rizal.

Metro Manila is no stranger to stay-at-home orders, as it endured one of the world’s longest and strictest coronavirus lockdowns from March-June 2020, also ordered by Duterte. The president infamously issued a “shoot to kill” order to Philippine police last April if they encountered quarantine violators in public after curfew.