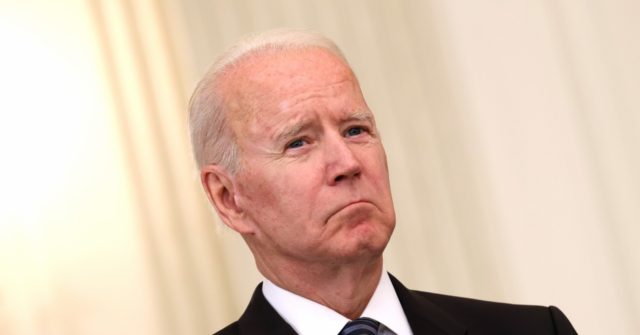 “If … you think you need weapons to take on the government, you need F-15’s and maybe some nuclear weapons,” His Fraudulency Joe Biden warned his fellow citizens Wednesday.

That nonsense was part of a bigger point Slow Joe was looking to make about how there have always been restrictions on the Second Amendment, even on day one — you know, all the way back in the 1700s.

“The second amendment from the day it was passed limited the type of people who could own a gun and  what type of weapon you could own,” His Fraudulency opined, adding this sizzling whopper, “You couldn’t buy a cannon.”

Then Joe’s old age caught up to him with this word salad of incoherence:

Those who say the blood of liberty, the, uh, blood of patriots, you know, and all this stuff about how we’re going to have to move against the government. Well, the tree of liberty is not watered with the blood of patriots. What’s happened is that there never been– if you wanna– think you need weapons to take on the government, you need F-15’s and maybe some nuclear weapons. The point is there’s always been the ability to limit– rationally limit the type of weapon that can be owned and who can own it.

That’s pretty big talk from a government that hasn’t won a war since 1946, that couldn’t defeat farmers with AK-47s in Afghanistan over 20 years.

Here’s the full 39 second commercial for the NRA clip:

BIDEN: “Those who say the blood of Patriots, you know, and all the stuff about how we’re gonna have to move against the government.”

“If you think you need to have weapons to take on the government, you need F-15s and maybe some nuclear weapons.”pic.twitter.com/WVHUffpphP

Anyway, even the far-left propagandists at PolitiFact were forced to admit Biden lied about “Cannon Control.”

“Historians say they are doubtful that there were laws to bar individual ownership of cannons during the Revolutionary War period,” writes PolitiFact before hitting His Decrepitude with a “False” rating.

But is anyone else out there more than a little freaked out that we have a sitting president in obvious cognitive decline who’s threatening American citizens with nukes and is apparently so paranoid, he sees gun owners as a group that wants to “move against the government?”

Other than the left-wing terrorists in Antifa and Black Lives Matter, who’s talking about moving against the government?

No one — again, other than the Democrat party’s allies in Black Lives Matter and Antifa — is looking to launch an armed assault on the White House.

What I found most troubling, even more troubling than Biden’s worsening cognitive state, is that instead of him taking the approach that no one has anything to fear from their government, he’s looking to intimidate us with a not-so-veiled threat about F-15s and nuclear weapons.

Maybe I missed it, but we’ve never had a president before who basically said to his fellow Americans, Bring it on, but you better have nukes and F-15s!

What kind of crazy, paranoid talk is that? And from a president who hardly knows who he is.

That clip above, Biden’s 39 seconds of lies, paranoia, demonization, and threats, is the best argument for purchasing firearms and ammo I’ve ever seen.