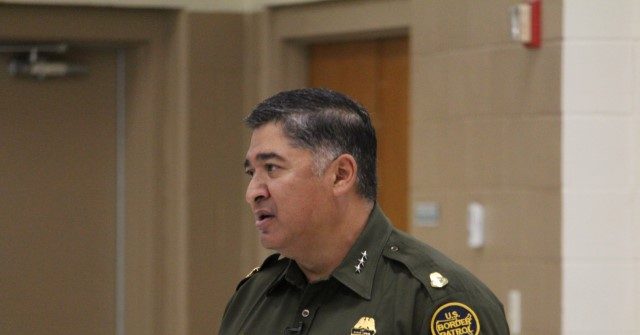 Chief Ortiz, a native of Del Rio, was met by a mostly friendly crowd of residents and law enforcement. After a brief presentation highlighting the rising number of apprehensions along the southern border, the tenor changed among some of the attendees, frustrated with the “catch and release” of migrants in their community.

One such resident asked, “What does it matter that you apprehended 140,000 if you are just releasing them into the United States for us to support for generations to come?” The question was met with applause from other attendees.

Another resident expressed frustration at mostly male migrants trespassing on his property. “I’m not worried about the family units that give up; I am concerned with mostly groups of males that are screaming in Spanish at me in my back yard. I have daughters and I am worried for their safety.”

The resident said it takes hours for Border Patrol agents to arrive and he does not know what he is supposed to do in those situations. Ortiz replied, “I promise we will respond as soon as possible, if there is an emergency, notify local authorities if needed. We know that this situation does not allow us to respond as quickly as we would like but we will get there as soon as we can.”

The theme was echoed by several other residents and local ranchers. Ortiz’s responses read genuine but offered no quick solution. Chief Ortiz promised attendees he would be honest and transparent about a situation that has the Border Patrol stretched thin.

Ortiz eventually predicted an end to the CDC Title 42 emergency COVID-19 authority that allows the agency to immediately expel some migrants almost immediately. “We know that this authority will eventually expire, we are expanding our abilities to deal with an increased flow when that happens.”

In a press conference held afterward, Ortiz spoke about his optimism that a solution to the situation along the southwest border could be achieved through partnerships with other law enforcement agencies and foreign governments.