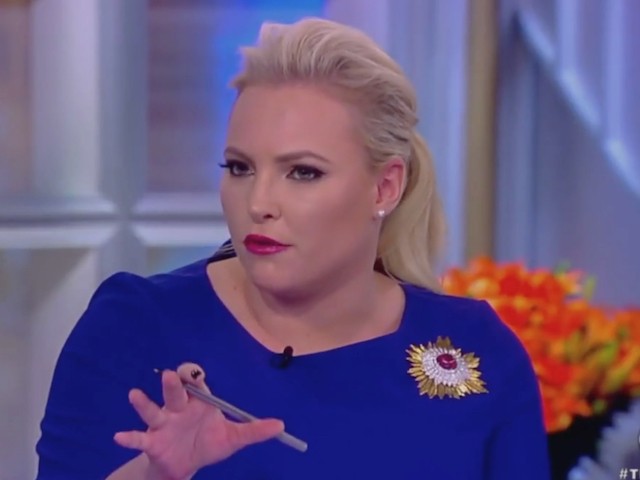 Meghan McCain told her co-hosts Tuesday on ABC’s “The View” that hammer thrower Gwen Berry was not “appropriate or patriotic” when she protested the flag and the national anthem at the U.S. Olympics trials over the weekend.

In a video from Fox News, Rep. Dan Crenshaw (R-TX) said, “We don’t need any more activist athletes. She should be removed from the team. The entire point of the Olympic team is to represent the United States of America.”

Whoopi Goldberg said, “Meghan, do you think that Crenshaw has a point with his criticism?”

McCain said, “Yeah, I agree with him. I want to first and foremost say Dan Crenshaw is an American hero. He’s a Navy SEAL that got his eye blown out, among other things. He was on a Navy SEAL team that killed terrorists and did incredible things defending our nation.”

She continued, “I’ve spent the last year and a half hearing every argument possible and understanding why athletes protest in the United States of America like Colin Kaepernick. The problem I have is this woman is doing this internationally. If anyone saw Vladimir Putin’s speech when he met with President Biden, he’s using the propaganda that America is an irredeemable crap-hole against us. Saying, ‘You think your country is so great? Look at BLM. Look at you don’t even treat your people correctly.’ At the same time, he’s literally imprisoning people. We’re having our enemies using our own propaganda against us, which turns into a real national security risk.”

McCain added, “I don’t understand why we all can’t have shared experiences in this space or have our own stories. For some reason, my relationship with the flag isn’t allowed. My love of the American flag, my love of the National Anthem.”

After telling a story about her father, the late Sen. John McCain (R-AZ), being in a Vietnam prison, McCain said, “I will die for this. I will die on this hill that it is not appropriate or patriotic to go to a foreign country where you’re supposed to be representing America and act like it’s just about you. It’s not about you! It’s about all of us.”