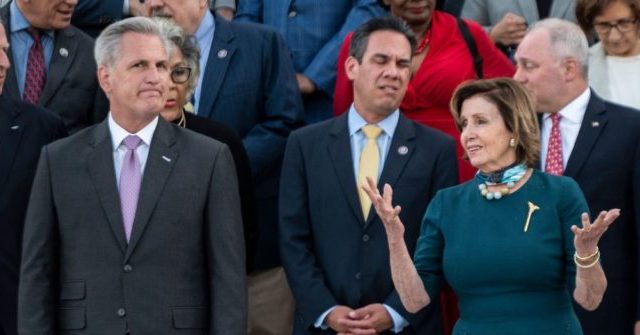 “Unless Speaker Pelosi reverses course and seats all five Republican nominees, Republicans will not be party to their sham process and will instead pursue our own investigation of the facts,” McCarthy wrote.

Speaker Nancy Pelosi has taken the unprecedented step of denying the minority party’s picks for the Select Committee on January 6. This represents an egregious abuse of power and will irreparably damage this institution.

Denying the voices of members who have served in the military and law enforcement, as well as leaders of standing committees, has made it undeniable that this panel has lost all legitimacy and credibility and shows the Speaker is more interested in playing politics than seeking the truth.

McCarthy’s announcement comes after Pelosi wrote Wednesday in a press release that “With respect for the integrity of the investigation, with an insistence on the truth and with concern about statements made and actions taken by these Members, I must reject the recommendations of Representatives Banks and Jordan to the Select Committee.”

“Monday evening, the Minority Leader recommended 5 Members to serve on the Select Committee. I have spoken with him this morning about the objections raised about Representatives Jim Banks and Jim Jordan and the impact their appointments may have on the integrity of the investigation,” she continued. “I also informed him that I was prepared to appoint Representatives Rodney Davis, Kelly Armstrong, and Troy Nehls, and requested that he recommend two other Members.”

National Republican Congressional Committee (NRCC) Spokesman Mike Berg issued a statement Wednesday accusing Pelosi of “abusing her power and acting like a tyrant. Democrats’ only goal with this sham committee is to score political points.”

Moreover, Schiff’s appointment to the committee comes after he claimed over and over again former President Trump was guilty of colluding with the Russians to win the 2016 presidential election. He also led the charge twice to impeach the elected president, in which the president was acquitted each time.

Another appointee to the committee, Murphy, who is challenged by U.S. congressional candidate and Florida state Rep. Anthony Sabatini (R), is thought only to be “placed on the January 6 Crucifix Committee by Nancy Pelosi in order to shame every Florida Republican as a domestic terrorist,” Sabatini told Breitbart News.