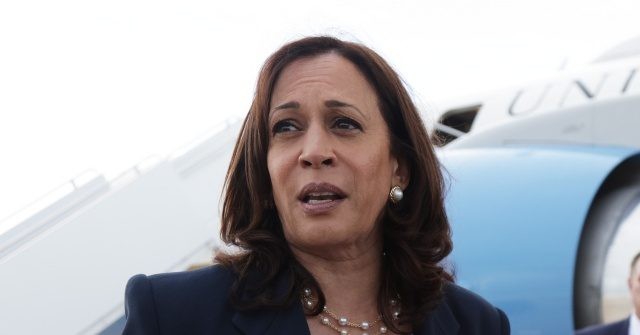 Vice President Kamala Harris failed to mention illegal immigration’s impact on American citizens and communities across the United States during her first visit to the U.S.-Mexico border on Friday.

Harris, who visited the El Paso, Texas, region told Americans not to “lose sight of the fact that we’re talking about human beings” when talking about the border crisis and the hundreds of thousands of border crossers who have made their way to the U.S. since President Joe Biden took office.

“Let’s not lose sight that we’re talking about stories … involve horrendous tales of abuse and fear and harm, not only for folks who are coming from their home countries experiencing that, but along the path of their migration,” Harris said, adding:

And so let’s recognize with a sense of humanity that these issues must be addressed in a way that is informed by fact and informed by reality and informed by perspective that actually is dedicated to addressing problems and fixing them in the most productive and constructive way.

Unmentioned in Harris’s remarks was the impact that illegal immigration has on Americans, specifically working and middle class communities, who foot the bill for border crossers in depressed wages, public services, medical care, increased crime, and more foreign competition in the U.S. labor market.

In a lawsuit filed this week, the state of Texas, for example, detailed how residents of the state are paying the bill for the Biden administration’s expansive Catch and Release operation where tens of thousands of border crossers are being released into the U.S. interior daily.

When the [Biden administration] do[es] not remove or exclude illegal aliens in compliance with federal law, the Defendants’ inaction causes Texas to incur these higher costs, which are not recoverable at law from the federal government. [Emphasis added]

A case out of Florida this month reveals the extent to which Americans become collateral damage of open borders. Marvin Ailon-Mendoza, a 20-year-old illegal alien who entered the U.S. as an Unaccompanied Alien Child (UAC) via the border, was charged with raping an 82-year-old woman after allegedly breaking into a senior living facility.

Ailon-Mendoza is a previously convicted sex offender but was never deported.

Harris likewise ignored the sheer numbers of illegal aliens at the border. Current projections predict that about 1.2 million border crossers will be encountered at the border by the end of the year and hundreds of thousands more will successfully cross the border, undetected.

“This would make Calendar Year 2021 among the ten worst years for illegal immigration in U.S. history and place us squarely back into Clinton-era numbers,” Steven Kopits of Princeton Policy Advisors wrote in analysis this month.