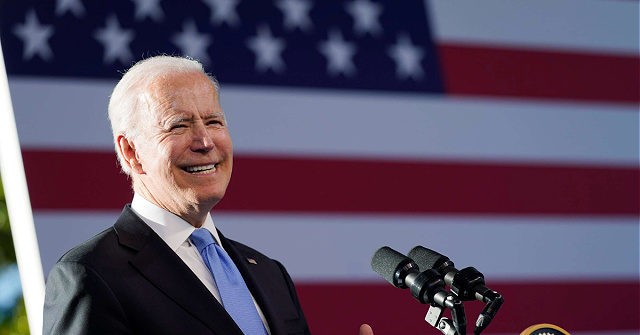 The government of Iraq condemned President Joe Biden on Monday for bombing sites within the country, and within Syria, to allegedly combat the threat of Iran-backed militias in the area.

Iraqi officials called the move a “flagrant violation of Iraqi sovereignty” and a spokesman for the Ministry of Defense asserted that the country is “studying resorting to all available legal options to prevent the recurrence of such attacks” on its territory.

The condemnation follows a similar statement from the regime of Iran-backed dictator Bashar al-Assad in Syria, which used almost identical language to condemn the “blatant violation of the sanctity of the Syrian and Iraqi territories.”

The U.S. Department of Defense announced late Sunday Biden had ordered airstrikes on the border between Iraq and Syria, hitting both countries.

“The targets were selected because these facilities are utilized by Iran-backed militias that are engaged in unmanned aerial vehicle (UAV) attacks against U.S. personnel and facilities in Iraq,” the Pentagon explained in a statement, claiming that the targets aided two Iran-backed terrorist organizations, the Hezbollah Brigades and Kata’ib Sayyid al-Shuhada (KSS), that had targeted American forces.

The two groups form part of the Popular Mobilization Forces (PMF), a coalition of militias created in Iraq to fight the Islamic State (ISIS). The PMF is a legal wing of the Iraqi military and the Pentagon has previously praised it for its prowess in fighting the terrorist group. The Department of Defense also insisted under former President Donald Trump that fighting the PMF is not part of its mission in the Middle East.

Under Trump, the Hezbollah Brigades lost its founder, Abu Mahdi al-Muhandis, in an airstrike in Baghdad that also eliminated senior Iranian military leader Major General Qassem Soleimani in January 2020. At the time, Biden accused Trump of tossing “a stick of dynamite into a tinderbox” and stated that he would not have approved the airstrike.

The Pentagon insisted in its statement on Sunday that American forces are “in Iraq at the invitation of the Government of Iraq for the sole purpose of assisting the Iraqi Security Forces in their efforts to defeat ISIS.” The Islamic State is not an Iran-backed terrorist organization and the targets of the airstrike are members of the Iraqi Security Forces.

“The Ministerial Council for National Security is studying resorting to all available legal options to prevent the recurrence of such attacks that violate Iraq’s airspace and territory,” Rasool narrated, “in addition to conducting a comprehensive investigation into the circumstances of the accident and its causes, and working to prevent it from recurring in the future.”

Rasool added that Baghdad was engaging the Biden administration in “continuous dialogue” to achieve the full withdrawal of American forces from the country, “the details of which will be announced later.”

Contrary to the Pentagon’s statement that it is present in Iraq at the government’s request, the Iraqi Parliament passed a resolution in January 2020, shortly after the Soleimani airstrike, calling for the full withdrawal of U.S. troops in the country. The negotiations mentioned this week appear to be a continuation of attempts to execute the demands of that resolution.

Iraqi Prime Minister Mustafa al-Kadhimi also issued a brief statement on Monday against the Biden airstrike, calling it a “blatant and unacceptable violation of Iraqi sovereignty and Iraqi national security.”

“Iraq reiterates its refusal to be an arena for settling scores,” he asserted.

The Syrian Assad regime, one of Iran’s most loyal proxies and a staunch American enemy, also condemned the airstrike on Monday, though its statement was more predictable than the more U.S.-friendly Iraqi government.

“The Syrian Arab Republic condemns the US blatant aggression on the Syrian-Iraqi borders and considers it a flagrant violation of the sanctity of Syrian and Iraqi lands,” the state-run Syrian Arab News Agency (SANA) relayed on Monday. SANA attributed the statement to a “source” who blamed Israel for the strikes, citing no evidence that the Israeli government was in any way involved with the incident.
“[The source] went on to say that those attacks escalate the tense crucial situation in the region,” SANA claimed, “and prove ‘what we have repeatedly said in Syria that the US military presence in our region is basically meant to serve the Israeli goals and the separatist forces contrary to the interests of its people.'”

SANA reported on Tuesday that U.S. forces in Syria, which regularly cooperates with pro-Iran forces, came under attack that day in Deir Ezzor, where American troops are stationed at the al-Omar oil field. Al Jazeera cited a spokesman for the U.S.-led anti-Islamic State coalition, spokesman Colonel Wayne Marotto, confirming a rocket attack on the military base there and U.S. “counter-battery artillery fire” in response. The independent Syrian Observatory for Human Rights reported that it had no evidence of any casualties in the incident.