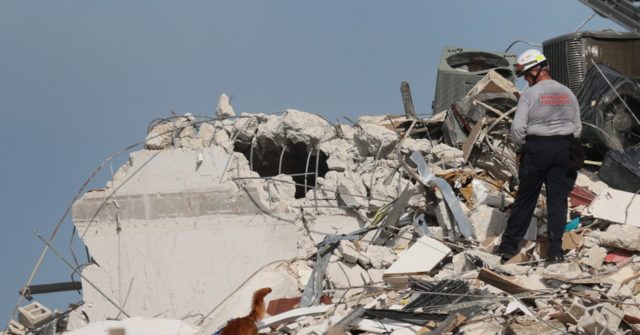 “Unfortunately, this has been a tragic night,” Levine Cava said during a press conference, WPTV reported.

The mayor said 120 people were accounted for but there are 159 individuals still missing while rescuers sift through the debris in hopes of locating them.

“The search and rescue team worked throughout the night and it was a very active scene, from above and below,” she told reporters, adding crews brought in heavy machinery to assist in the operation:

“We will continue search-and-rescue because we still have hope that we will find people alive,” Levine Cava noted.

“This work is being done at extreme risk to those individuals,” she continued. “Debris is falling on them as they do their work. We have structural engineers on site to assure that they will not be injured, but they are proceeding because they are so motivated.”

#MDFR continues to work tirelessly as search and rescue efforts are ongoing in the #SurfsideBuildingCollapse. All the resources we have available, including local assets from partner agencies are being brought in to assist. pic.twitter.com/fs20qcchZX

According to WPTV, the building, built in 1981, was in the middle of its required 40-year recertification process.

In a social media post on Thursday, Gov. Ron DeSantis (R) said he signed an executive order “to provide assistance to the families and community who were affected by the tragedy in Surfside”:

I’ve signed an executive order to provide assistance to the families and community who were affected by the tragedy in Surfside. I’m proud of our @FLSERT team for their strong coordination during this emergency to meet all requests in the area.https://t.co/kQBAvTU3oG

When asked about the building’s recertification process, the mayor told Good Morning America the structural engineers were at the site assisting in the search and rescue efforts.

“Because of course, they have to make sure that the debris does not fall on our first responders. So we’re focused right now on search and rescue for sure. The further investigation will be very critical to understand what was at the root of this,” she stated.