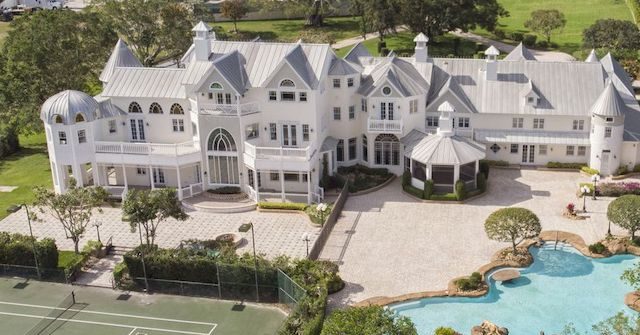 Courtney Wilson and Shenita Jones invited loved ones to their “dream home and estate” to celebrate their wedding Saturday, however, they did not own the mansion and did not have the homeowner’s permission to use it as the venue.

“The suburban Fort Lauderdale estate had everything: a bowling alley, swimming pool with a waterfall, hot tub, tennis courts, a gazebo, and an 800-foot bar. Wilson said it was God’s plan that the couple marry there,” the Associated Press (AP) reported Thursday.

However, owner Nathan Finkel never gave permission to hold the celebration at the home. Finkel was shocked when Wilson arrived Saturday to set up for the celebration and called law enforcement, according to the outlet.

“I have people trespassing on my property,” he reportedly said to the 911 dispatcher. “And they keep harassing me, calling me. They say they’re having a wedding here and it’s God’s message.”

“I don’t know what’s going on. All I want is (for) it to stop. And they’re sitting at my property right at the front gate right now,” he continued.

Police officers informed Wilson he had to leave the property which he did and no charges were filed against him.

“I don’t want to talk about it,” Wilson later told reporters.

According to Radio.com, Wilson toured the mansion in the time leading up to the wedding date and posed as a potential buyer. Finkel had been working to sell the home for two years, with a price tag of $5.7 million.

“A few months later, this guy asked Nathan if he could use Nathan’s backyard for his wedding,” Keith Poliakoff, attorney for Southwest Ranches, explained, adding, “Nathan said no.”

“The guy figured it was a vacant house and didn’t realize Nathan lived on the property in a different home,” Poliakoff continued. “This guy had no idea he lived there. You know the shock that must have been on his face when he showed up at the gate and the owner was home?”

According to the New York Post, the couple described themselves as “the Royal couple” in an online wedding invitation and advertised a reception featuring a “red carpet cocktail hour” on Saturday and brunch the following day.

Records from Broward County reportedly showed a marriage license was granted to the couple last week but they were not registered as married on Wednesday, the AP article concluded.

Trader Joe's ditches mask mandate; Walmart, Target, and others keep it for now

Rep. Ritchie Torres: Here’s why I’m supporting Israel — despite the...