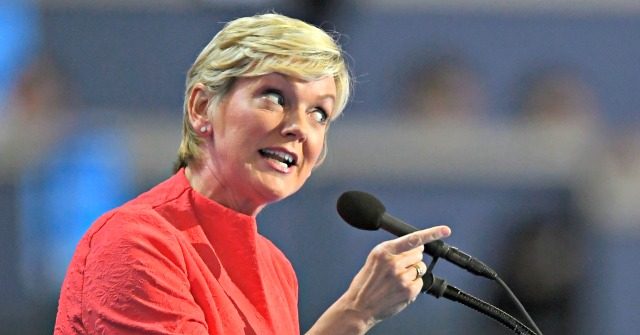 Granholm still owns up to five million in stock options in the electric vehicle battery producer Proterra, according to her financial disclosure.

A White House official confirmed to the Washington Free Beacon’s Matthew Foldi that Granholm still holds stock in the company.

Granholm is still “in the process” of selling off her stock in the company, according to the White House, adding she would sell it “within the 180-day window permitted by the ethics agreement.”

Proterra announced in January they would go public through ArcLight Clean Transition Corp, which doubled the price of ArcLight shares.
On Tuesday, Biden conducted a “virtual” tour of Proterra to highlight batteries and electric vehicles as part of his $2.5 trillion infrastructure plan.

After Biden’s visit, shares in the company spiked after he highlighted the need to boost federal spending on green electric vehicle technology.

The president’s spending plan would invest $174 billion into electric vehicles and includes a plan to replace 20 percent of diesel school busses with electric busses.

Granholm also championed the electric vehicle industry during an appearance in the White House press briefing in April.

“It is a huge distance that we’ve traveled, and so much of that is thanks to the decision by the federal government to invest in saving the backbone of the manufacturing industry, which was at that point the electric — or the vehicle industry,” she said.

Missouri hunter mistakenly shoots hiker he thought was a turkey

The time to negotiate an annual month of remote work may...