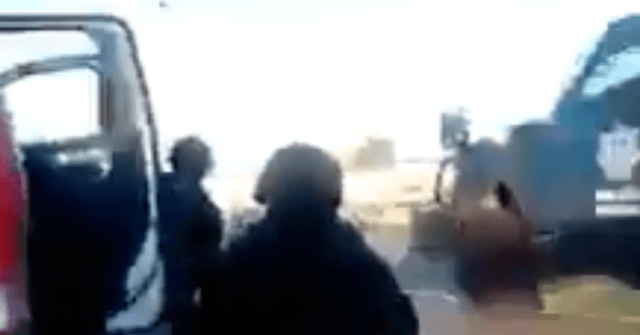 “It is public knowledge what is happening in Reynosa,” El Bronco said. “The recommendation for the people of Nuevo Leon is to avoid visiting unless urgent. To wait for things to calm down, which should be in a few days.”

El Bronco also spoke briefly about the current situation in the border city of Nuevo Laredo, where gunmen from the Cartel Del Noreste faction of Los Zetas kidnapped more than 100 victims traveling to and from Nuevo Leon.

During those comments, El Bronco apologized to the public for previously stating that authorities had rescued 16 victims. That information was wrong and no rescue had taken place.

“An apology, I erroneously said we had rescued them. No,” El Bronco said.

Ildefonso Ortiz is an award-winning journalist with Breitbart Texas. He co-founded Breitbart Texas’ Cartel Chronicles project with Brandon Darby and senior Breitbart management. You can follow him on Twitter and on Facebook. He can be contacted at [email protected].

Brandon Darby is the managing director and editor-in-chief of Breitbart Texas. He co-founded Breitbart Texas’ Cartel Chronicles project with Ildefonso Ortiz and senior Breitbart management. Follow him on Twitter and Facebook. He can be contacted at [email protected].

Gerald “Tony” Aranda is an international journalist with more than 20 years of experience working in high-risk areas for print and broadcast news outlets investigating organized crime, corruption, and drug trafficking in the U.S. and Mexico.  In 2016, Gerald took up the pseudonym of “Tony” when he joined Breitbart Texas’ Cartel Chronicles project. Since then, he has come out of the shadows and become a contributing writer for Breitbart Texas.

GOP Rep. Diaz-Balart: Cuban Protests Have 'Nothing to Do with COVID' – It's About Freedom

GOP Rep. Diaz-Balart: Cuban Protests Have 'Nothing to Do with COVID'...