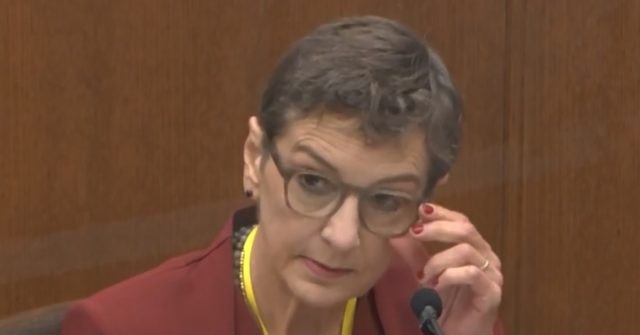 Forensic pathologist Dr. Lindsey Thomas testified Friday at the trial of former Minneapolis, Minnesota, police officer Derek Chauvin that absent a struggle with police, the death of a person with the drugs George Floyd had in his system would have been ruled an overdose.

Defense attorney Eric Nelson cross-examined Thomas, a witness for the prosecution, after she had testified that the “primary mechanism of death” in the case was “asphyxia or low oxygen.”
Nelson was careful to ask about the level of drugs, because prosecutors have suggested the levels in Floyd’s body were low.

Nelson: So again, just kind of taking into consideration, removing certain variables, right, you find a person at home, no struggle with the police, right, and the person doesn’t have a heart problem, yet you find fentanyl and methamphetamine in this person’s system at the levels they are, would you certify this as an overdose ?

Dr. Thomas: Again, in the absence of any of these other realities, yes, I could consider that to be an overdose.

Nelson: And the level of fentanyl in a person — again, in this hypothetical scenario — there are deaths certified as drug overdoses significantly lower than 11 nanograms per milliliter ?

Nelson: As low, I believe, as three percent or three nanograms per milliliter?

Nelson: So the ingestion of drugs is unique to that individual’s body, right?

Nelson: I have no further questions.

Other experts have testified for the prosecution that Floyd died from a lack of oxygen caused by Chauvin kneeling on his neck.

But the prosecution has shifted its theory from arguing that Chauvin cut off the flow of blood in Floyd’s arteries, and began referring to a knee placed on Floyd’s “neck area” rather than the neck itself, following earlier cross-examinations.

Joel B. Pollak is Senior Editor-at-Large at Breitbart News and the host of Breitbart News Sunday on Sirius XM Patriot on Sunday evenings from 7 p.m. to 10 p.m. ET (4 p.m. to 7 p.m. PT). His new novel, Joubert Park, tells the story of a Jewish family in South Africa at the dawn of the apartheid era. His recent book, RED NOVEMBER, recounts the 2020 Democratic presidential primary from a conservative perspective. He is a winner of the 2018 Robert Novak Journalism Alumni Fellowship. Follow him on Twitter at @joelpollak.

The one that gets away: Joe Biden’s jaded romance with Iran