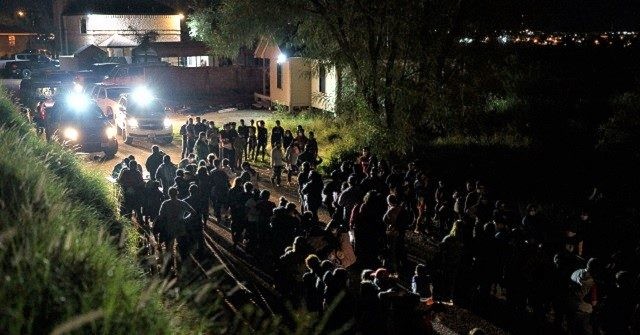 Rio Grande Sector Chief Patrol Agent Brian Hastings told KURV radio in McAllen, Texas, that more than 40 of his agents tested positive for COVID-19 so far this year, Fox News reported. His announcement comes amid a spike in the number of migrants apprehended in this sector who are testing positive for the virus.

Just during the first two weeks in July, 135 migrants being detained tested positive for the coronavirus. This marks a 900 percent increase over the previous 14 months, Fox News stated. This is just in the Rio Grande Valley Sector.

On Saturday, Rio Grande City Station agents apprehended a group of nearly 300 migrants who illegally crossed the border in La Grulla, Texas, Breitbart Texas reported. During a medical screening in the field, one of the migrants exhibited symptoms of COVID-19. The agents arranged transportation to an area hospital where the migrant tested positive for the virus.

So far this year, Rio Grande Valley Sector agents apprehended 131,380 family units, an increase of 1,283 over the same period last year. Other demographics included 154,604 single adults, a 265 percent increase, and 45,679 unaccompanied minors, an increase of 536 percent, according to the June Southwest Border Encounters Report released by U.S. Customs and Border Protection on Friday.

Border Patrol does not typically test migrants when they are initially taken into custody — instead they are tested when they are transferred, either to Department of Health and Human Services (HHS) custody if they are unaccompanied children, or to nongovernmental organizations if they are part of a family unit for transport into the U.S.

Currently, the majority of those encountered are turned back due to Title 42 public health protections put in place during the Trump administration. Just under 105,000 of those encounters in June resulted in a Title 42 expulsion.

Despite the spike in migrants testing positive for COVID-19, the Biden Administration is reportedly considering ending the Title 42 coronavirus protection protocol put in place by the CDC during the Trump administration.

So far this fiscal year, Border Patrol agents used the Title 42 authority to expel more than 750,000 migrants, according to the CBP’s June Southwest Land Border encounters report, released on Friday.

A group of Republican senators sent a letter this week to President Joe Biden, warming that his ending of the Title 42 program would have a “dire impact on the crisis at the southern border.”

“Ending this order will have a dire impact on the crisis already engulfing our southwestern border,” the group of 26 senators wrote. “We urge you in the strongest possible terms not to take this action.”

Breitbart Texas reached out to U.S. Customs and Border Protection officials for additional information regarding agents and migrants testing positive for the coronavirus. A response to our request has not yet been received.