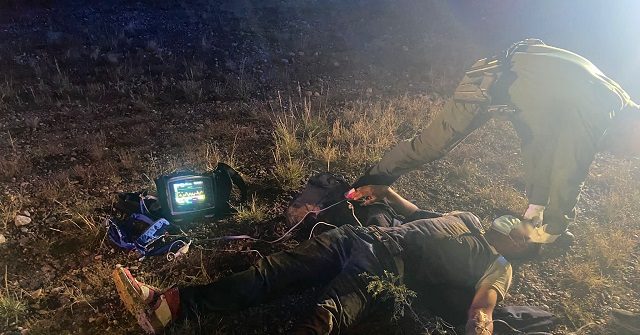 Migrant rescues along the U.S.-Mexico Border by patrol agents reached a staggering 9,500 through the end of June. Officials report this nine-month total is 81 percent more than seen during Fiscal Year 2020.

Del Rio Sector Chief Patrol Agent Austin Skero tweeted that Border Patrol agents rescued a record high 9,500 migrants during the first nine months of Fiscal Year 21, which began on October 1, 2020. He said this represents an 81 percent increase over the total number of rescues carried out in all of Fiscal Year 2020 — which was also a record.

Smugglers are abandoning migrants in dangerous areas, leading to a dramatic rise in rescues CBP wide. In Fiscal Year 21 thru June, CBP conducted 9,500 rescues, which is 81% more than ALL of Fiscal Year 20. Del Rio Sector agents have performed over 1,700 of these rescues! pic.twitter.com/1LCMPs5jIq

During the first 10 months of Fiscal Year 2020 (October 2019 through July 2020) Border Patrol agents rescued more than 4,100 migrants, Breitbart Texas reported. The 9,500 rescued so far this year more than doubles that nearly year-to-year comparison.

In July 2020, then acting CBP Commissioner Mark Morgan told Breitbart Texas, “It is very disheartening how little coverage migrant rescues get in the press.”

“Our agents put their own lives at risk to save others who illegally enter the U.S. In addition to being exposed to the same elements that put these migrants at risk, the agents also face possible exposure to the coronavirus because of the close contact required in rescue operations,” Morgan said. “Despite this, our agents continue to go out every day to save lives and protect the public.”

Chief Skero reported that Del Rio Sector agents carried out more than 1,700 of the 9,500 rescues (18 percent) carried out by agents in all nine southwest Border Patrol sectors.